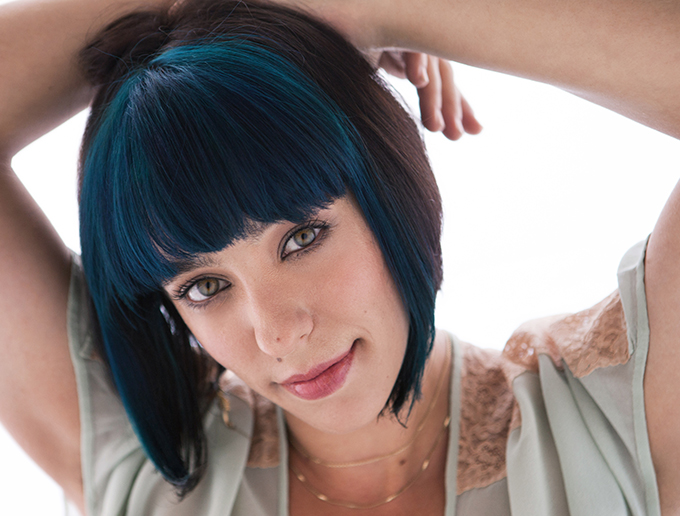 AFTER YEARS ON THE ROAD WITH HER BROTHERS NICK AND KRIS BUILDING A STERLING REPUTATION WITH THE CRITICALLY ACCLAIMED TRAMPLED UNDER FOOT, DANIELLE NICOLE SCHNEBELEN, Kansas City’s vivacious and stunningly talented vocalist and bass player, now fronts her own band. With an eponymously-titled EP, and a full-length album entitled Wolf Den behind her and new record, Cry No More, just let out of the gates, Danielle looks poised to become a member-in-good-standing of blues and roots royalty. With her oft-stated respect for those heroes that have come before her, Danielle undoubtedly does not take any of this lightly.

RHRM: Before we jump into Danielle Nicole music, I would like to chat with you just a little bit about the Legendary Rhythm & Blues Cruise. Recently, you have been playing reunion shows on the ship with your two brothers in Trampled Under Foot, Nick and Kris, as well as with your solo band. You have been on earlier voyages, as well. You seem to have a nice connection with the cruise people and a good thing going on. I have nothing but nice things to say about the Legendary Rhythm & Blues Cruise and Roger and Scott and all of the people who put it together.
DN: I’ve been on many. I’m blessed to have become a part of the LRBC family. The thing about the cruise is, when you get on, if you make a good impression… I mean, they listen to the cruisers. They have a survey at the end. Once you get into their hearts… Roger reads every one of those himself, personally. He reads every one. He called me last week. When he was talking about future TUF reunions on the cruise, he’s, like, “I’m just sitting here, going through all of the surveys” and stuff. So, they really listen to the cruisers. If they keep requesting you, you know, you get to go on… ha ha ha! So, I’ve been on, probably, eleven.

RHRM: That’s not a bad deal.
DN: No, it’s not. It’s cool. It’s still really hard work. Anybody that thinks music is a paid vacation, even on the cruise, it’s not. It’s very exhausting, but it’s worth every bit of it.

RHRM: And it’s not like you do only one show. You perform several times during each cruise.
DN: No. You do four shows. I think the headliners are the only ones that do three. But, you know, you do four shows. And then, you just want to go jam with everybody. And you’re trying to speak all week, over the bands and stuff. So, it takes a toll. Usually, the musicians have to recover a few days after, just like the cruisers do, you know. Ha ha ha!

RHRM: I have discussions and debates about this subject pretty often with friends that are not involved in the music industry. When we talk about some great bands where we grew up that never really broke through and are still performing but that have all kinds of side jobs to survive, my friends will say something that goes like, “You know, they can’t complain. They’re doing what they want. They’re playing music.” And I try to explain to them that it’s not just the two hours that the band gets onstage.
DN: Oh, no.

RHRM: It’s all day doing all kinds of other crap just as you are right now speaking to me. Ha ha.
DN: With music, playing the show is the reward for all of the hard work. That part’s free. You’re paid for all of the shit all day long. The tour management. The interviews. I don’t mean that as a bad thing. But you don’t leave your work. Your work is with you all of the time. Just like you. Your work is at home, as well. You don’t ever have that separation. It’s one of those businesses and one of those career choices that you live it all of the time. Doctors don’t go home and operate. They research and they study and stuff. But musicians and writers, you’re constantly working on your craft. Maybe doctors wasn’t a great analogy, but you know what I mean.

RHRM: Yeah. I got you. But especially if your hobby, your passion, is also your work. It’s tough to find a place to draw that line and just take it easy.
DN: It is. Just little things that nobody ever thinks of that you’re doing. You know, making labels for crap, ha ha ha. Working on the computer all day, getting spreadsheets together for my merch.

RHRM: But going back to the cruise, it’s really great that you continue to go back and perform as a solo artist, as well as a part of Trampled Under Foot.
DN: Yeah. And as a cruiser, you know, they do the first one and then they want to come back. They’re like, “Ohhh, I see what it’s about now.” All of the virgins. I’m, like, “You’re really fucked now.” Ha ha ha! A lot of those cruisers, they’re not rich by any means. They work so hard all year and don’t do anything else so that they can go on the cruise. It’s a beautiful thing.

RHRM: It was mentioned to me on the cruise by another singer that the movement of the ship sometimes threw off her rhythm onstage and that she noticed it happening while she was watching a few of the other artists perform. Does that type of thing affect you at all when performing at sea?
DN: Not too much for me. The Showroom is always the hardest. Either the Showroom or the Crow’s Nest. Or what was it? Revelations. The top one. But, no, it doesn’t really throw off my rhythm other than if we take a dip and I don’t expect it, it startles me and it is kind of a distraction. Because you can’t always just let go and close your eyes and not think about… you know, ‘cause if you lose your bearings, you can really get seriously injured if they hit some turbulent water or a school of fish or whatever. Those engines hit something or just the break in the waves. You gotta pay attention to it. So, it is a distraction. But it doesn’t throw me off so much physically, because my instrument is attached to me. Where I can see a drummer or a piano player who’s independent from their instrument could physically get thrown off from it, ha ha, and miss keys and…

RHRM: Buddy Guy mentioned it at one of his shows. And he’s past eighty now. He mentioned that at his age, he needs to be careful not to take a fall.
DN: Yeah. I mean, one bad fall and he’s done with music. You know, you break your elbow… That’s it. And that goes for anybody. So, you have to stay conscious of it.

RHRM: I was so impressed by the variety, the different types, of venues on the ship. Each venue is completely different from the other ones. In each one, you are in a completely different and unique place.
DN: You are. It’s a different world. It’s a different state of mind. I build the shows, I build the sets, according to where we’re at. The Pool Deck, that’s the party show. That’s where everybody’s dancing and it’s up and it’s great. And the Showroom, I use it for more of a refined show, you know, where I can really do my deep ballads and stuff that where you have to listen to the lyrics. And it really envelops you, as opposed to the Pool Deck. And then, what was it… It’s normally called the Queen’s Lounge on the January ship, the one that was mid-ship, the little lounge. That’s, kind of, also a party thing. But I would do a lot more acoustic stuff on that one. And so, it’s really cool to build around the environment.

RHRM: Speaking of your deep ballads, it’s very rare that I experience being moved by the singing of a young, white woman to the extent that I am by older heroes in the blues and r’n’b world. Of course, I’m referring to Koko Taylor, G-d bless her soul, and Bessie Smith and Big Mama Thornton and, of course, Ruth Brown and Etta James. And even Diunna Greenleaf today, who’s not old but moves me in that way.
DN: Yeah. She’s got an old soul, man. She’ll take you to church. She’ll take you to church.