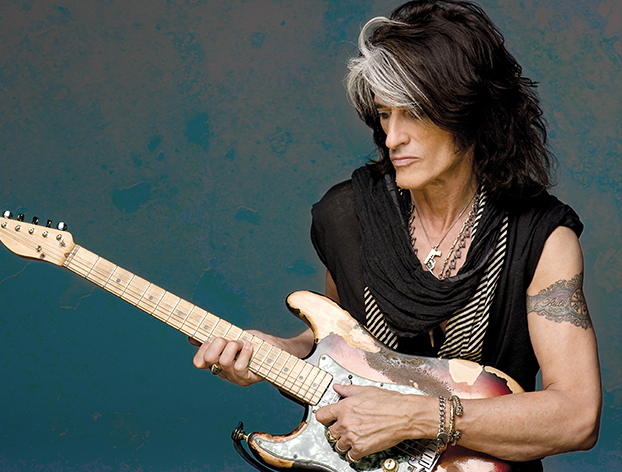 Aerosmith is America’s all-time most successful rock band. And Joe Perry has been upfront, playing lead guitar for the band for four and a half decades as one-half of the infamous Toxic Twins, acting as sparring partner to singer Steven Tyler, a man with whom he continues to share, enjoy and endure a love/hate relationship. The exception being a short period of time when Joe went out on his own with The Joe Perry Project during the late 1970s/early 1980s. Late last year, Joe released his autobiography, Rocks – My Life In and Out of Aerosmith, which comes out in October on paperback. The book is an unflinching look at the highs and lows of Joe’s life and career, touching on the inevitable and compulsory topics of sex and drugs. But unlike many other unfortunate memoirs in this literary genre, Rocks keeps the spotlight squarely focused on music, a reflection of the man about whom the book is written. As Aerosmith got ready to hit the road once again for The Blue Army Tour 2015 and as its Aerosmith Rocks Donington 2014 performance in England was being prepared for release, now was an optimal time for Red Hot Rock Magazine to catch up with Joe to discuss the contents of his first book, as well as all things Aerosmith.

RED HOT ROCK MAGAZINE: Hello, sir. How are you?
JOE PERRY: How ya doin’? I’m good.

RHRM: It’s nice to hear your voice again. We are excited to be placing Joe Perry on the cover of Red Hot Rock once again.
JP: Awesome.

RHRM: I read your book ravenously from cover to cover. Such a great book. Such great insight into Aerosmith and all of the stuff you have done outside of Aerosmith.
JP: Thank you. That’s great to hear. Most people who have read the book have given us positive feedback. It’s the first one and there may be additions, but this is it. You know, we poured our heart and soul into this. So it’s good to hear that stuff. It really is.

RHRM: I was a huge fan of Aerosmith music from the ‘70s when I got into the band. But the first show that I was able to go see was on the Rock In A Hard Place tour while you were with the The Joe Perry Project and not with Aerosmith. Steven was collapsing onstage in between songs, the show was not good and I made a promise to myself never to see the group perform again. Ha ha. Well, you rejoined for the next album, Done With Mirrors, and I, of course, broke my promise, went to a show and I have continued to go see the band year after year and pick up everything you guys put out there.
JP: Yeah. Ha ha. 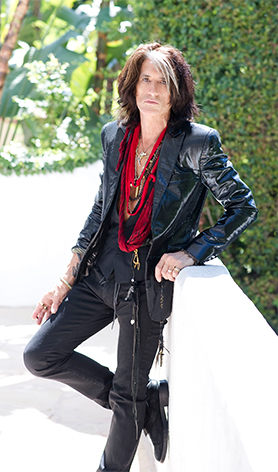 RHRM: Now that I have mentioned Done With Mirrors, that is a record about which I have always wanted to talk to you. I understand that there were no big hits on there, but I love that album. It is a no-nonsense, down’n’dirty Aerosmith rock record. And I have noticed that you play snippets of the song “Shame On You” when you appear on late night talk shows and sit in with the bands. Why is it that you always mention that the album was a weak one?
JP: Well, I don’t think that people…Times had changed so much, you know, as far as the music business. I mean, it was like, in Musicland, especially pop music, it seems like every three years there’s like… In those days, the music business was still king, you know what I mean? Arguably, the executives and the lawyers and the managers could sit there and go, “We’re more important than the artist.” I kind of heard that at that point. So it’s kind of like, there were a lot of changes in the business and we just didn’t have, there wasn’t anything on there that the record company felt was sustainable enough. They didn’t get behind it. The band still wasn’t clean, you know, we were still working under the old style, I mean, the whole partying thing. Every recording session was…I mean, we were trying to control it. We were dead serious about making a great record, but it just wasn’t…Ted Templeman was a great producer and worked great for Van Halen. But for some reason, it just didn’t match up with us. There were a lot of reasons. And when I listen back to it, I just don’t hear that spark. It almost felt like we were walking through it, doing the best we could. But we had a little bit more traveling to do together as a band. I mean, the main thing was doing that first tour, the one without an album, the Back In The Saddle Tour, with no record label, no nothing but the support of our fans. It was really encouraging because the fans were there to hear us play the songs that we had made famous in the ‘70s. And we were playing really well. But the record just didn’t deliver. And we knew we had to change the way we were…our whole creative process. That’s when we met with John Kalodner again and we talked about working with Bruce Fairbairn. He had just had all that success with Bon Jovi. We just weren’t ready yet to be at our best. So, even though there are some good riffs on there, it’s like, once the record’s out, the real hardcore fans like it, but to get that big spread, the record company just didn’t get the vibe. Also, at that point, there was MTV. MTV was starting to be a huge factor. And we put out a video that we directed. You know, we weren’t really happy about videos, in general, anyway, so we figured we would do it ourselves. It got shown about three times. You live and learn. And we went and found some directors that actually knew what they were doing making videos. If you remember, videos were almost as important as having a good song back at that point. It was exploding. So, anyway, that record just kind of sat there. And it’s the same with Rock In A Hard Place. Uhm, uhm, or the one that I left before the record was done.

RHRM: Night In The Ruts.
JP: Yeah, and you know, we didn’t get a chance to tour behind that. I had left the band and it kind of got overlooked even though the band was playing great and I thought there were some great songs on it, especially for the hardcore, hard rock fans. I thought it was some of the best playing we had done in the studio for years. But since, when I left, there was no drive to go out and tour behind it, you know what I mean, and they were bound and determined to replace Brad and I with two other guitar players and cut a new record. So, it never saw the light of day, really, even though I think it was a great record. That’s it. It was a slow build. You know, we got back together, but it took a lot of work to figure out how to make it work in the new marketplace.

RHRM: I hope that you don’t mind me saying this, but even though the show I saw when you weren’t there was disappointing, I really like the Rock In A Hard Place album. There is some great stuff on there. Have you given the record a listen and, if so, what do you think of it? It must be difficult to listen to an Aerosmith album without Joe Perry on it.