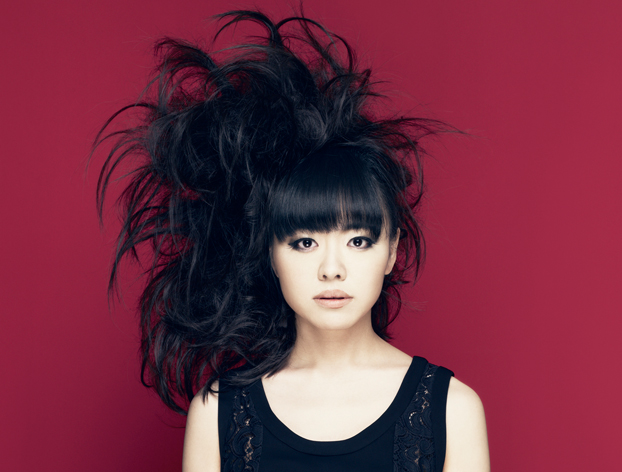 TO LABEL HIROMI A PRODIGY is a massive understatement. She is a piano-playing phenomenon, a talent tsunami, a once-in-a-generation artist that reminds music lovers how life-affirming this art form can be when delivered with passion, fire and confidence.

Japanese born, Hiromi has combined her skills in the United States with those of English drumming legend Simon Phillips (The Who, Nazareth, Jeff Beck, Toto) and bass-playing giant Anthony Jackson (Steely Dan, Paul Simon, Al Di Meola) to form The Trio Project. This wonderful constellation has played many shows worldwide over the last several years and recorded several albums, the most recent of which is entitled Spark, released on Telarc/Concord. In addition to albums of her own, Hiromi has also found the time to record and perform with other giants of jazz such as Stanley Clarke and Chick Corea. Pigeonholing The Trio Project has been made purposely difficult with its integration of practically every genre of music imaginable, from jazz and classical to rock and gospel to Latin and African rhythms. To make things a little easier for those interested in exploring Hiromi’s music and to give a general idea as to what their ears will be enjoying, the term jazz fusion sums things up pretty nicely.
Red Hot Rock Magazine caught up with Hiromi shortly after the mind-blowing experience of bearing witness to one of her brilliant performances.

RED HOT ROCK MAGAZINE: Hey, Hiromi! How are you doing?
HIROMI: Hi. How are you?

RHRM: Good. Thank you. It was so nice meeting you in South Florida and your show was simply magnificent. We enjoyed it so much.
HIROMI: Thank you.

RHRM: You are very welcome. Offstage, you seem like such a shy, sweet, humble, unassuming person. But when you get behind the piano, it really seems to take you away. At times, you are a composed classical pianist. Then you suddenly transform into a rock monster. You really seem to enjoy yourself during the performance.
HIROMI: Ha ha ha. Yes, I do. I really feel alive when I perform.

RHRM: When we saw you perform last week, you broke two piano strings, one at rehearsal and one during the show. It’s not often that one sees that at a show.
HIROMI: Actually, I broke a second one during the show. I didn’t want to say it because it wasn’t affecting the other strings. Ha ha. When I break a string and the broken part is touching the next string, then I have to call somebody to cut it off. But the one that broke later in that show wasn’t touching the string next to it. So I didn’t say anything. Ha ha. Yeah. I broke two strings during the show and one during sound check.

RHRM: Ha ha. Three piano strings in one day. Quite an accomplishment.
HIROMI: Yeah. I mean, it happens sometimes when I play an old piano, which is just ready for the new strings to be installed. It happens, but never three at a time. Ha ha. So, I was like, wow, you know. Ha ha.
RHRM: Just watching you perform, it is obvious how powerful both your hands are. But you also play so gently, with the slightest touch. You play aggressively with your entire hands, but I also love your technique when you play quickly with just the tips of your fingers. It’s just beautiful.
HIROMI: Hmm, mm. Yeah. I mean, I love dynamics in music, you know. The dynamic range is so important. We can play loud. But we can play as soft as we want. And I think it’s just the beauty of music.

RHRM: But when you were learning to play piano, was it more difficult learning to play fast and soft than fast and aggressive?
HIROMI: Oh, yeah! Playing pianissimo, like really, really soft actually requires much more power, energy, I mean physically, to play. It’s very interesting. Playing soft is much more physically demanding, ha ha, than playing loud, actually.

RHRM: Besides the intensity in your playing, you have so many interesting stylistic flourishes with the way you approach the piano, a lot of which I am guessing are not conventional. When you were taking lessons or were in school, did you have teachers along the way who tried to discourage you from playing the way you wished?
HIROMI: I studied with one teacher from six years old to eighteen years old. I mean, I studied piano with her. And she was always… I mean, she was a classical piano teacher, but she was a big music fan of all genres. So she was the one who introduced me to jazz. And, you know, I started listening to jazz when I was eight. She was a very interesting teacher. Instead of saying, let’s say, play loud or play soft, she would take out her color pencil and just color all my sheet music with red or blue so that I could see it visually instead of telling me with all of these specialized words in music like fortissimo and espressivo. She never really used those words. She only colored my sheet music. For a little kid, I think it was easier to understand, you know, play with passion, play romantic. She was just showing me all these colors. She was a very unique teacher. She encouraged me to compose. She encouraged me to improvise. And sometimes I started to play something that was not written on the sheet music. And she never actually objected. That was great for me.

RHRM: But then what happened when you moved to the States and started school at the Berklee College of Music? Did any of the professors there try to get you to stop what you were doing?
HIROMI: Well, at Berklee I was studying composition and arranging. So I was studying more about the instruments that I don’t play because I wanted to write for an orchestra, I wanted to write for a big band. I was more into arranging. I wasn’t really studying performance there. I was playing, of course, but that was more on my own.

RHRM: Your spectacular new album, Spark, has just been released. Before I mention specific compositions, I need to say that your ego is apparently very well in check. Both in a live setting and on your records, you allow not only yourself to shine, but the other musicians as well. I mean, already on the first couple of tracks of the new album, the title track and “In A Trance”, Simon is soloing away. Great stuff!
HIROMI: Yes. It’s so important. Any great band, in any genre, when they are onstage, a good band, a great band, always allows each other to shine. That’s how it should be. And I really feel that the better teamwork we get, you know, we shine even more. So I think the latest album is really representing the great teamwork that we established in the past five years.

RHRM: How much within the songs when you perform them live is improvisation or is almost all of it worked out beforehand? You seem to exchange glances sometimes with the other guys as if to say, “That was cool, but surprising.”
HIROMI: We always want to surprise each other. Ha ha ha. I mean, it’s like a musical adventure every night. A lot of the music is improvised. I mean, each one of us has solo sections and we trade off and we try to just do something that we haven’t done yet. We try to find a new aspect, a new landscape, in music that we haven’t even discovered yet. And that’s the beauty of improvisation. Because, you know, you don’t know what you are getting into every day. The audience doesn’t know, but we don’t know either. Ha ha ha.

RHRM: The title track of Spark is simply magnificent. It brings together all I love about the best in progressive rock, jazz fusion, classical music and Latin music. It’s just brilliant.
HIROMI: Thank you. I was so happy when I came up with that riff in the beginning. I was like, “This is it. This should be the title track of the next album.” I knew it straight away when I wrote that four-bar riff in “Spark”.